It would not be an exaggeration to say that millions of global tourists, flocking to Singapore in search of fashion, shopping, glitz and glamour hardly know the proper history of this island city-state located on the southern tip of the Malay Peninsula. It is a wonder, that being the smallest country in Southeast Asia, Singapore happens to be the site of several ancient port cities and a possession of several empires in its “not-so-well-known” history.

To start with, when Singapore was colonized by the United Kingdom in the 19th century, it was nothing but a small Malay fishing village, the first records of its existence being made in the Chinese texts as early as the 3rd century. The island which then bore the javanese name “Temasek” and which happened to be an outpost of the Sumatran Srivijaya (an ancient Malay kingdom on the island of Sumatra) empire, gradually rose to become a significant trading city. However, throughout history, it had to bear the brunt of several political conflicts, which altered its destiny in course of time.

For example, Singapore was a part of the Sultanate of Johore, until it was set ablaze by portuguese troops in the Malay-Portugal wars in 1617. Again, in 1819, British East India Company made a treaty with the Sultan of Johore and established Singapore as a trading post and settlement. Later, seeing instant growth and immigration from various ethnic groups to Singapore, it was declared a crown colony by Britain in 1867. Its status was soon raised to that of an entrepot town by the ruling British empire due to its strategic location along the busy shipping routes connecting Europe to China.

Destiny had written a few more dramatic twists and turns for Singapore, “The Lion City”, as it also called. Further occupied by the Japanese Empire in World War II, it finally became part of the merger which formed the “Federation of Malaysia. Finally, after much tussels with the Federal government in Kuala Lumpur, the nation ultimately acquired independence in 1965.

However, what we see today as a tousists’ paradise was for many years, a fledgling nation struggling for self-sufficiency. Overburdened with mass unemployment, housing shortages and lack of land and natural resources such as petroleum, it was a sociopolitically volatile and economically undeveloped nation, relying massively on foreign investment and government-led industrialisation. The situation started changing after Lee Kuan Yew joined as prime minister in 1959. Within three decades, his administration curbed unemployment, raised the standard of living and developed Singapore’s economic infrastructure, thus elevating Singapore into a developing nation and subsequently to developed status.

In the recent years, the country has tackled various disasters, the major ones being the 1997 Asian financial crisis, the SARS outbreak in 2003, and terrorist threats posed by the Jemaah Islamiah (JI).

It is really heartening to know that with 63 surrounding islets and with a total land area of 682 square km, the main island of Singapore, with its market-based economy, has grown into a thriving centre of commerce and industry in just 150 years. Housing is thriving also places like Kent Ridge Hill Residences are popping up all over. Successfully increasing its manufacturing base after being a ‘backward fishing village’ for many years, Singapore today thrives on various industries including shipping (Singapore today is the busiest port in the world with over 600 shipping lines sending super tankers, container ships and passenger liners), electronic components manufacturing and above all its booming travel/tourism industry. The island city state located at the tip of the Malay Peninsula that has suffered various political and economic onslaughts is now home to four million people, also boasting of one of the highest per capita gross domestic products in the world. The economic progress of Singapore as a nation can be an enriching example of how a mere “fishing village” and a British naval base for decades can be reborn as an important financial, commercial and educational center for South East Asia.

The credit for this resurrection goes to the PAP Government, who, assisted by a far-sighted Dutch economic adviser, realized the need of maintaining its colonial inheritance by attracting foreign capital from the developed world to establish export-oriented industries, while at the same time building up a modern service sector in Singapore based on banking and financial services. Needless to say, this economic strategy proved a phenomenal success, producing real growth that averaged 8.0% from 1960 to 1999. Thus, relying on foreign investment and expertise, while at the same time building up strong state enterprises, the provision of infrastructure, housing, transport and other basic services for the local population began increasing notably, and the old Singapore consisting of overcrowded and unsanitary slums was demolished strategically.

In recent years, the trade policies of the Singapore government which included commitment to free trade, active export promotion strategy, the ‘open arms’ policy towards multinationals and the support of trade liberalization have made Singapore an economically stable nation. In due course of time, Singapore has also developed an export trade that thrives on medium and high-technology electronics components. Such trade undoubtedly focuses on the key-strengths of Singapore, including “hi-tech” sectors as information technology and bio-technology.

A cosmopolitan society with harmonious interaction among various different races, the inherent cultural diversity of the island is a source of one of the prime attractions of the nation. To be precise, this cultural diversity is the ultimate result of the diversity of the population, the intermingling of various ethnic groups and the amalagamation of Chinese, Malay and Indian immigrants. It is not unnatural for one to witness a Malay wedding taking place beside a Chinese wedding at a void deck, on the ground floor of a HDB apartment block in the Singapore city. Infrequent intermarriage between the Chinese and Indians are not unusual occurrences in Singapore. Besides indigenous Malay population, Singapore houses a majority of third generation Chinese as well as Indian and Arab immigrants. Thus, the diverse mix of races result in a significant degree of cultural diffusion with its unique combination of ethnic groups. Maybe that is one of the reasons why one would find very little culture that is specifically Singaporean. However, there exists a Eurasian community and a community of Peranakan or “Straits Chinese,” (a community of mixed Chinese and Malay descent).

Such a significant degree of cultural diffusion has given Singapore a rich mixture of diversity for its young age. One of the prime examples is the Singapore’s cuisine, a massive cultural attraction for tourists. Chinese, Indian, Malay, Indonesian, Italian, Peranakan, Spanish, French, Thai and even Fusion tops the menu. To speak of art and culture, Singapore is identified globally an emerging cultural centre for arts and culture, including theatre and music. Housing is booming with places like 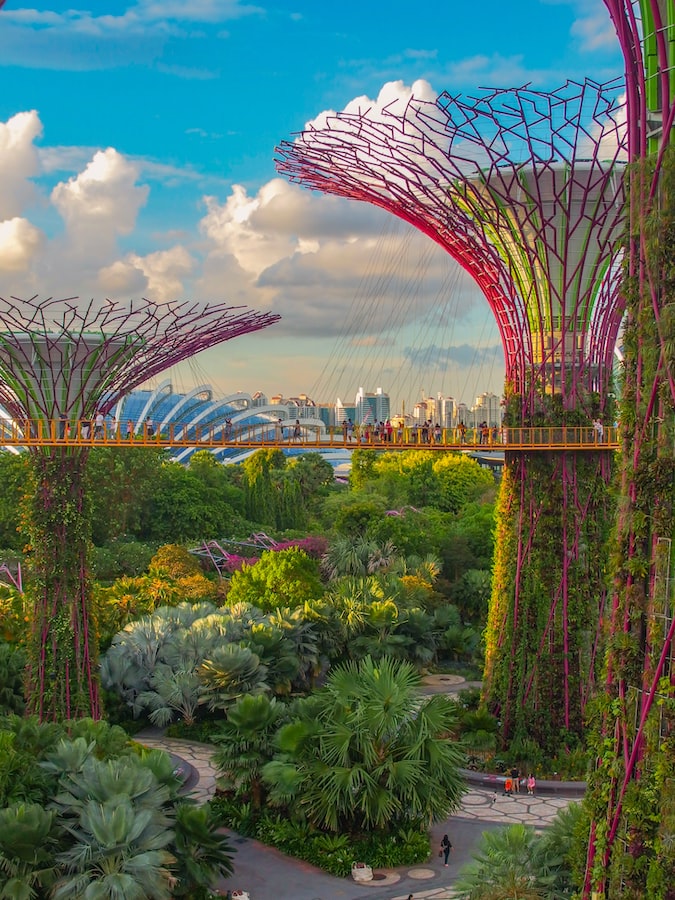 Often called the “gateway between the East and West”, it has seen the emergence of several performing arts groups, especially in theatrical arts. A number of productions were staged successfully and several groups, including TheatreWorks, have performed overseas too.

As a cosmopolitian and multi-racial society, Singapore has also been the seat of major festivals from various ethnic groups associated with their respective religions. Those again, reflect the diversity of races residing there. While the Chinese are predominantly followers of Buddhism and Taoism, there are even Christians, Catholics and “free thinkers”: ones who don’t confirm to any religious faith. Thus, in today’s Singapore, religions tend to cross racial boundaries and even merge in unusual ways, combining a little of the mysteries of the older generation with the realistic world of today.

Celebrated and renowned worldwide as a delightful haven for tourists, Singapore has been able to earn major revenues courtesy its booming tourism industry. With the rise of tourism in Singapore, there is a stiff competition among hotels to run for the best slot. There are cheap airline travels to Singapore today, including apex fare, discounted airfares to Singapore and the like. A seat for the world’s most delectable seafood, awe-inspiring sea-beaches, impressive bird-parks and night safaris that account for wonderful wildlife adventure, Singapore today happens to be a little dynamo in Southeast Asia, embodying the finest of both East and West. Truly, the dynamic city rich in contrast and colour captures the hearts of millions of global tourists with its harmonious blend of culture, cuisine, arts and architecture and above all, its unbridled energy.

While on entering this cosmopolitan, multi-cultural city, one experiences the mélange of flavours from around the globe, the multicultural heritage of the nation is bound to sweep one off his feet as he discovers an ever-changing mosaic of fascinating contrasts. Thus, the amalgamation of ancient beliefs and contemporary culture, of rich legacies and sleek modern living makes Singapore an ever-youthful, ever-enchanting nation for tourists.

Tourist interests in Singapore: While tourism is continually infesting ChinaTown, a cultural section of Singapore, with shops and street vendors offering a glimpse into the days of old, the Asian Civilizations Museum (a diverse cultural museum) is there to exhibit antiques like a ninth-century Buddha and a Chinese snuff box. For lovers of art and architecture, the Thian Hock Keng Temple (Historic Taoist temple near Singapore’s waterfront) happens to be a “must watch” religious site. Another wonder is the unforgettable Singapore Art Museum, which, since its opening in 1996, offers an immense rotating collection of Singaporean and Malay sculpture and art. If you are a connoisseur of shopping and fine dining, there is Orchard Road, the ritzy shopping and dining area, often referred to as the “Park Avenue” of Singapore. For the lovers of spectacular underwater beauty, there is the Underwater World of Sentosa, showcasing the awe-inspiring beauty of a whole different world beneath the seas.

All said and done, the strategic location of Singapore, its cultural contrasts and diverse tourist attractions contribute to its success as a leading destination for both business and pleasure.